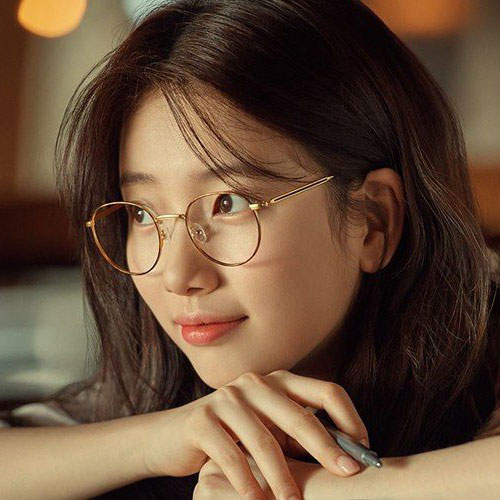 Recently graduated from Brown University, Sua Swann is our star junior reporter. When she's not out buying the team lunch and fulfilling coffee orders at the Lodge, she's hunting out leads for her next story.

Sua somehow managed to mess up her final year at Brown University, and the fallout of it all left a huge dent in her grades, and with few employment options after graduation.

Just when money started to dry up, a too-good-to-be-true job offer came from a mysterious source for a reporter role in Haven. With a pay rate more than the junior role really justified, she quickly snapped it up and packed up her belongings into her rust-bucket of a car.

If only she read the fine print...

And now Sua finds herself in a little over her head, and with every article that she writes, needing to cover up a supernatural world that she is still figuring out.

Just as well Sua loves nothing more than unravelling a good mystery and investigating the unknown.

She's got this, or so she thinks.

And she looks like a model, except she's got a little more ass. Don't even bother, unless you've got that thing she likes. Ooh, I hope she's going home with me tonight

Hey, those flashing lights come from everywhere, the way they hit her I had to stop and stare. She's got me love stoned, man, I swear she's bad and she knows. I think that she knows

She shuts the room down, the way she walks and causes a fuss. The baddest in town, she's flawless like some uncut ice. I hope she's going home with me tonight

And all she wants is to dance, that's why you'll find her on the floor. But you don't have a chance. Unless you move the way that she likes. That's why she's going home with me tonight, oh

Why Pineapple Belongs on Pizzas

[Printed near the middle of the Haven Courier, in the lifestyle section.]

This week in the lifestyle supplement of Haven Courier, we aim to try and solve the age old problem of whether pineapple belongs on pizza or not. The debate having been brought to a head in our local community with the opening of two new pizzerias on the north side: Luigi's and Marios.

Marios is a little more traditional as you might expect from a pizzeria claiming to be pineapple free, while Luigi embraces it's hipster vibe and boldly and proudly shows off it's pineapples.

A Greek immigrant by the name of Sotirios "Sam" Panopoulosis widely thought to have been the inventor of the Hawaiian pizza in 1962 and died not understanding why his creation caused so much controversy. And I admit, I do sympathise with the guy. Most do not think twice about tacos al pastor or spit roast pork with rings of grilled pineapple.

In a recent survey conducted by Time Magazine, a number of pineapple on pizza haters, lovers and a smattering of those in between were brought together for a taste testing. And remarkably, the majority of those that came in with strong claims of dislike, found themselves enjoying it, and making comments like: "I was worried this would happen. This is actually pretty good," and "This isn't as bad as I remembered tasting."

It seems that much of the hatred for pineapples on pizza has come about not from a genuine dislike of the taste, but rather another bandwagon for people to jump on and dislike each other for, brought about by memes and internet videos. A safe way to bond together as a tribe over a mutual dislike for an inanimate object.

But as well, some people have been burned by poor execution of it, where thick chunks of sugary sweet pineapple have been dumped on strips of ham and cheese. The truth of the matter is, if you hit that amazing cosmic balance between salty, sweet and savoury elements, pineapple pizza isn't just good. It's pretty bloody amazing.

With Valentines Day just under a month away...

... it's time to start thinking about what to get the woman, man or goat in your life. And what better way to show them just how special they are to you than a bottle of exquisite perfume from The Fragrant Tree?

And our top three picks? For men, Myrrh and Tonka by Jo Malone. For women, Viper Green by Ex Nihilo and for your favourite goat in your life? Fucking Fabulous by Tom Ford of course.

[Printed near the middle of the Haven Courier, in the local news section.]

The meeting drew quite a large number of locals to the Hometown diner and began on a light note, with chipmunky helium voices brought about by delightful tentacle-dangling purple helium squid balloons and many in the crowd admiring one of the local Deputies. Attention in parts of the diner soon shifted to someone that was referred to simply as 'that hot uncle', though we were not able to identify this mystery man from amongst the crowd.

Once things got underway, a chirpy redhead woman took to the mic first, quickly educating us on the meaning of the FISH thing. And I think there were more than a few disappointed locals who were expecting free seafood baskets, and instead learned that it stood for: Friends Intent on Saving Haven. A group focused on ensuring the natural fish resource out in the bay is not put at risk, and the incomes of so many locals remains secure. And while you might be quick to dismiss this as something that doesn't effect you in your job at the checkout, or at one of the many local strip clubs, it's these fishermen that drive the economy in Haven. If they're not earning a profit, we're not either.

Powerpoint slideshows and various graphs were thrown up for everyone to see, and all of them painting a very grim picture: Haven is in trouble. After the recent storms, the fish numbers have dropped drastically and have not yet recovered, and no one quite knows why. And with so many lives lost in the storm, the fishing community is still reeling and needs your help. It needs the help of whole of the Haven populace.

They are after donations to help support the surviving families who have lost their loved ones to the storm and help tide over the fishing community till the fish stocks have been restored. And they need able bodied women and men to help them investigate and discover exactly what's going on out there.

The evening finished with Bo playing a haunting song on his ukelele.

Out along the harbour reach
Boats stand dried up on the beach
Ghost-like in the early dawn
Empty, now the fish are gone.

What will become of people now?
Try to build a life somehow
Hard, hard times are back again
No more fish, no fishermen.

With Valentines Day just under a month away...

... it's time to start thinking about what to get the woman, man or goat in your life. And what better way to show them just how special they are to you than a bottle of exquisite perfume from The Fragrant Tree?

And our top three picks? For men, Myrrh and Tonka by Jo Malone. For women, Viper Green by Ex Nihilo and for your favourite goat in your life? Fucking Fabulous by Tom Ford of course.

"I feel like a local celebrity after being quoted. Maybe I'll have a story for you sometime!"
- Jei

"Love her stories, they keep the rest of the locals up to date and gives us all something to talk about over dinner."
- Abel

"Some might not be proud to be caught like that. I am not opposed to free advertising. Next time though, we should negotiate royalties first. Might improve performance!"
- Sir Mournemyst