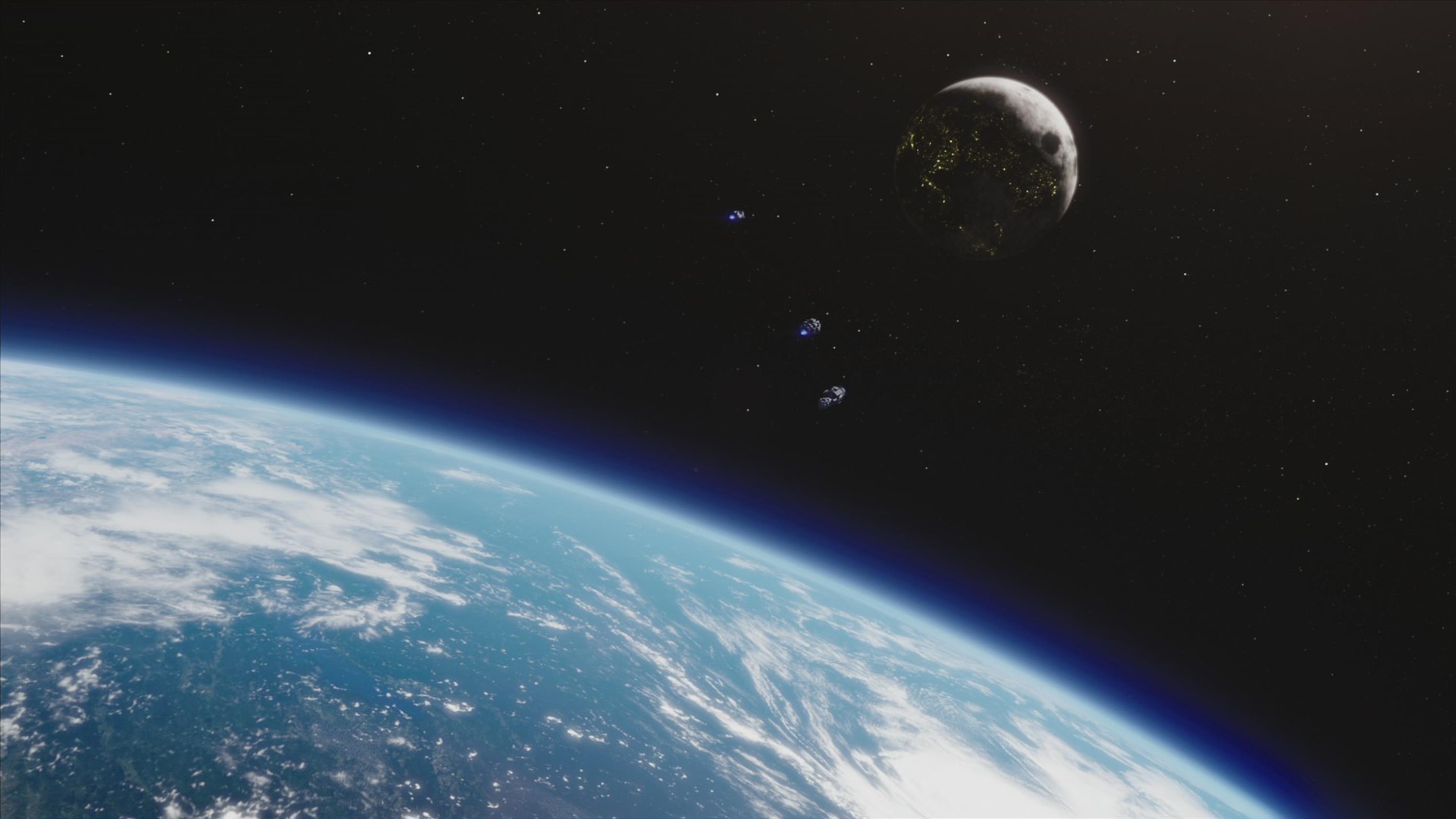 In the year 2217 mankind has conquered the solar system, worlds terraformed and stations and moon bases built throughout the expanse of space. Advances in genetic engineering have done away with disease and the ravages of age, as well as offering exotic cosmetic alterations. Neurologically implanted computers augment the minds of humans until they are capable of seemingly impossible feats of intelligence, strategy and coordination. Yet while civilization flourishes in the core worlds, the outer rim beyond the belt are far from tamed. Core police struggle to patrol an area so vast, so many weeks from civilization and piracy, smuggling and even slavery flourish.

Epsilon 7, a space station in the rings of Saturn, is the port of call for many who are new to the rim, whether they have come to make their mark or simply because they have no choice. While the station cleans itself up for its yearly inspection by core police, the rest of the time it is infamous as a hive of smugglers, pirates and slavers.

The Smugglers make their living sneaking minerals mined from the outer rim into the core and reselling them without the burden of core taxation. They also sell the goods stolen by pirates and frequently the slaves captured by the slavers.

The Pirates raid mining vessels and cargo transports, sometimes they will also happen upon cruise ships, whose passengers frequently possess much in the way of valuable personal items.

The Slavers are pirates who claim people as well as items, after their neural computers are hacked the slavers can produce false documents and sell them on as Synths, with nobody being able to tell the difference. The crew of trading and mining vessels bring these captains more profit than their cargo and they frequently prey upon other outlaw crews as well. But if one happens upon one of the luxury cruise ships from the core, that sale will make them rich for life.

Plot Twist Rolls: [Roll 1d10: 1-2 another crew comes to steal your prize, 3: A bounty hunter comes for you, 4-5: The target is infested with Xenomorphs, 6: A squad of core soldiers is stationed on the target, 7: The crew tries to self-destruct the ship rather than hand it over, 8:NPCs on your crew try and mutiny to take the prize and your ship for themselves, 9:The crew launches a counter attack to try and steal your ship after you board, 10:Core pirate hunters arrive en masse]

Those who do not have neurological augmentation. They may still be augmented with basic cybernetics or have altered genetics but their mind is entirely natural. Some choose this life for religious or philosophical reasons, others simply never had the money for augmentation, but out in the rim the most common reason for staying natural is reducing the risk of being taken as a slave. Sometimes derogatorily referred to as deadheads.

Humans with neurological computer implants. Capable of incredible feats of analysis and computation. They can also integrate with other systems for vastly improved performance, using smart weapons with much greater accuracy and piloting ships with much greater deftness. They can also record anything they see or hear and control their own programmable clothing to be dressed however they wish at any time, as well as cosmetic nanites to control eye color, haircolor, hairstyle and makeup. They can control the medical nanites in their bloodstream to control their own biochemistry, quickly healing wounds, supplying adrenaline or extra oxygen when needed and even making minor physical biological changes.

All these advanced features are unfortunately also vulnerable to hacking.

Lab grown humans designed to provide the labor force of the system. They are all augmented, with their implants giving the owners complete control over them in all respects. They are grown without any desire for self-determination or freedom, most content to do as they are told at all times. Despite this they are typically grown to be far more intelligent and physically adept than most natural born humans.

Any of the augmented can be turned into a slave if their neural implants are successfully hacked. Permanently taking control of someone in this way takes a week or two plugged into a computer designed especially for such things. Once hacked the slavers just need to obtain false certificates of manufacture and the Slave is ready to be sold on as a Synth.

The are two main types of slaves, common slaves are those taken in any opportunistic raid, their minds are usually altered until they do not even realize they were not born a Synth before they are sold on and profit comes from the fact they are much cheaper to acquire than growing a new Synth.

Luxury slaves are those supplied to wealthy clients who wish to own certain people. This might be someone they know, a rival, or potential lover who spurned them, or it may be a type of person in particular. Usually someone rich, famous or powerful. In these cases they pay a premium for the sense of power that comes over owning the individual and the slave themselves has their mind left more or less intact, but for an inability to tell anyone but their master they are not a true Synth.

Sometimes slaves are set free, although their compromised cyber defenses means they rarely remain so for long. Many slave owners, especially owners of luxury slaves however do frequently turn them into what are called Shades.

Shades are slaves who are programmed to believe they are free, given false memories and often a false identity they live out their lives entirely unaware of their true nature. Yet they owner watches all they do and see and hear through their implants and manipulates their life to their own entertainment.

With genetic engineering able to make almost any creature one could imagine, it was only a matter of time before scientists used it to create monsters. At first they were mostly show pieces or guard dogs, but eventually a lucrative industry developed out of live shows in which Xenomorphs battled each other, and then eventually Synths in grand arenas. In order to keep the public interest efforts were made to design Xenomorphs which would fight or defeat their enemies in increasingly 'entertaining' ways instead of merely killing or maiming them.

Over the years many Xenomorphs have escaped captivity, either because of neglect or malice and they frequently find their way onto ships, often taking over the vessels entirely or even whole stations, while others remain in small numbers, hiding in the dark recesses of larger stations and vessels and waiting for their prey.

Covering the ability to break into computer systems, including the neurological implants of the augmented. Control gained in this way is temporary and will be lost if the signal between the two fails or the hacker's computer is switched off or damaged. In which case all control is lost and the victim's cyber defenses re-assert themselves. In order to turn someone into a slave control needs to be maintained until they can be plugged into a slave-breaking machine.

(Hacking roll should be twice that of cyber defenses for a successful penetration, or equal to or higher the roll of compromised defences, systems are penetrated in stages a new roll is required to advance through each stage of penetration. Hacking attempts are only detected if they fail, or if the hacker does something overt with their control. Hacking cannot be used defensively but can be used to hack back at the person trying to hack you to incentivize them to stop. Signals generally fail if a distance of 50 meters is created between the target and the hacker or whatever the hacker is relaying their signal through.)

Stage One: Grants control of any smart items the victim interfaces with outside of themselves including clothing, smart weapons, and the cosmetic nanites that control makeup and hair. Can also trigger software used to alter or augment behavior, software that turns the augmented's normal walk into a stealthy prowl, or a graceful dancers steps. Or software that changes the language they speak or the words they typically use such as programs that allow them to use particular dialects.

Stage Three: Grants control of the motor cortex, able to control or limit the physical actions of the target.

Stage Four: Grants control of memory centers, can make target temporarily forget things or remember things that did not occur.

The defensive software used by the augmented to prevent themselves from being hacked. Will prevent a hacking escalation as long as you roll more than half the hacking roll of the attacker.

The cyber defenses of Synths, Slaves, and former Synths & Slaves have been designed with deliberate backdoor access for their owners and are thus much easier for others to compromise. Will prevent a hacking escalation as long as you roll more than the hacking roll of the attacker.

Skill at commanding or piloting a ship, covers ability to successfully chase other ships or evade them, to set or thwart ambushes, and to evade incoming fire. Worth half as much as Integrated Command.

Skill at commanding or piloting a ship, covers ability to successfully chase other ships or evade them, to set or thwart ambushes, and to evade incoming fire. Makes use of neuro augmentation to communicate far more effectively with the ship, worth twice as much as regular command.

The chosen side arm of most of the core and the rim, pulse weapons fire powerful bursts of energy which can burn through defenses or switched into a stun mode that delivers powerful electric shocks instead.

Pulse weapons with onboard computers that integrate with the neuro-implants of their wearers. They cannot be fired by anyone else and are significantly more accurate.

A molecular filament blade that sits coiled into a whip when not in use before snapping straight in order to be used as a blade. Mostly invisible except for the faint distortion in the air from the field that holds the blade in place, these weapons can cut through almost anything.

An individual's ability to avoid being struck with weapons fire and nanobblades by using cover as well as dodging and running.

Neuro-implanted individuals can instantly assess combat situations and probable lines of fire in order to avoid incoming attacks, seeming almost precognitive as they avoid incoming fire and blade swings. When this fails they can even have their adaptive clothing harden near probable impact points to lessen the severity of a blow.

Xenomorphs are engineered with a wide variety of ways to kill or disable their adversaries. From firing toxin dipped spurs to sharp fangs to powerful tentacles.

Xenomorphs usually rely on speed and stealth to close on their prey before they can be fired upon with any significant effect, but many also feature chitinous plates or redundant biological systems which allow them to absorb a great deal of damage before falling.

Crew members or other NPCs hired to fight for the PC. They might be augmented or natural but lack the coordination of an augmented crew.

Crew members or other NPCs hired to fight for the PC. They are coordinated by the characters own neural hardware making them far more capable of working in a coordinated manner than those under the direction of the unaugmented.

Xenomorphs can be implanted with neurological control chips in order to control them and use them to fight. They are still very dangerous to handle however, and best unleashed in situations in which bystander casualties are less of a concern.

For simpler tasks people often prefer droids of drones to synths. They are cheaper and easier to maintain, some work as bodyguards, repair droids or general utility droids carrying objects or running errands for their masters.