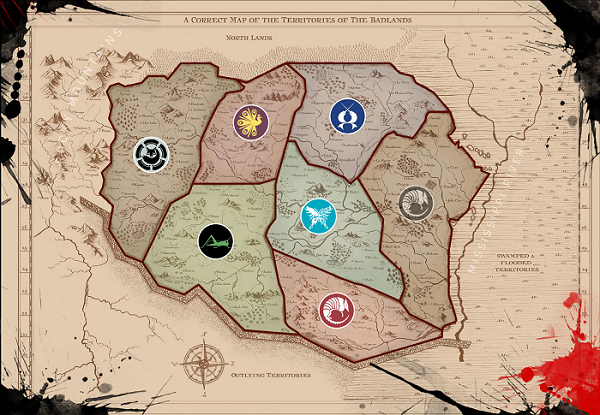 The wars were so long ago nobody even remembers. Darkness and fear ruled until the time of the barons, seven men and women who forged order out of chaos. People flocked to them for protection. That protection became servitude. They banished guns and trained armies of lethal fighters they called Clippers. This world is built on blood. Nobody is innocent here. Welcome to the Badlands.

Almost nobody can read. To be able to read is a very special gift. And if it is discovered that you can read, and you aren't a Baron, a Baron's family member, or favored by a Baron, you are likely to be killed.

It is a tense time. The Widow just killed her husband and not a lot of the Barons recognize her as, well. A Baron.

Not only that, but she is collecting Dark Ones, an act of war against the Monastery, a secret organization that exists to train Dark Ones in their gift.

Barons recognize only two ways to be a proper Baron. The standard for way a new baron to seize power is to openly challenge and then kill the former baron, taking the position by force. It's perfectly acceptable and often deemed the better way to become a baron. Many of the current barons gained their power by surpassing the previous ones.

A new Baron can also ascend to power, the position can also be inherited within a family. Baron Jacobee is an example of this. This way can have the drawback, however, as it can be seen that the position wasn't earnt.

While challenging and killing a Baron is perfectly acceptable, it is deemed underhanded if you assassinated a baron. The Widow is an example of this, as she assassinated her baron - her husband - due to his physical and sexual abuse. Because of the way she gained her barony, The Widow is under more scrutiny and her actions were more closely watched.

The Gift has a weakness. Quite a few. The command, "Peace be with you" in Azran is able to shut down the Gift. Overuse of the Gift, also, can burn the body out and over time, the user will DIE. It's usage is also limited, can't be used over long periods of time, as the body is quickly exhausted. Thus the user is quite weak and vulnerable after it's shut off.

Dreamgods to help run this joint are needed, use an application via petitions. Like with the Barons(at first) you've got to trust me enough, be comfortable enough, to state who you played. This can also be forgone with impressive roleplay.

Due to copyover after copyover, my progress with each room I have been describing has been reset. I am a bit tired of it so the descriptions will be lackluster until someone comes up with better descriptions.

To fit the idea of dreamworld monsters coming from here, mutated animals have been added that have existed since the war that caused the Barons to rise to power.

I know it's hilariously bad. I tried, okay? Shaddap. Have fun. Or make suggestions to make it better.

Send in a petition with an application if you're interested in playing a Baron. Anyone who takes the Baron role (at first) without sending in a petition, without being one of these people, will be removed and will take a hella persuasive personality to not be banned.

To apply, you must be willing to share names of your alts, to see if it's a good fit. Of course, the Barons until they get someone to play them will be NPCs... meaning you could totally forgo applying, make a character lower or higher tier, challenge them to a fight and kill them. After that is done, then no more applications are needed for that Baron of blahblahblah. You could also inherit it, too, although I'm still working out how families will play into roles.

You should watch Into the Badlands to get caught up on personalities of the current Barons if you're interested in applying as them, get a grasp on it's lore, etc. The first two seasons could be watched on Netflix, I believe there are three. I have absolutely zero idea where the third could be found.

There will only ever be seven barons, unless you count taking up the role as family, which I might wind up doing how family works. I might not. I'm open to suggestions for not only that, but room descriptions, room additions/names, new roles and stats, tweaking old roles and stats, plots, etc.

The Baron of Oil

The Baron of Opium

The Baron of Cogs

The Baron of Weapons

The Baron of Textiles

The Baron of Agriculture

The Baron of Mining